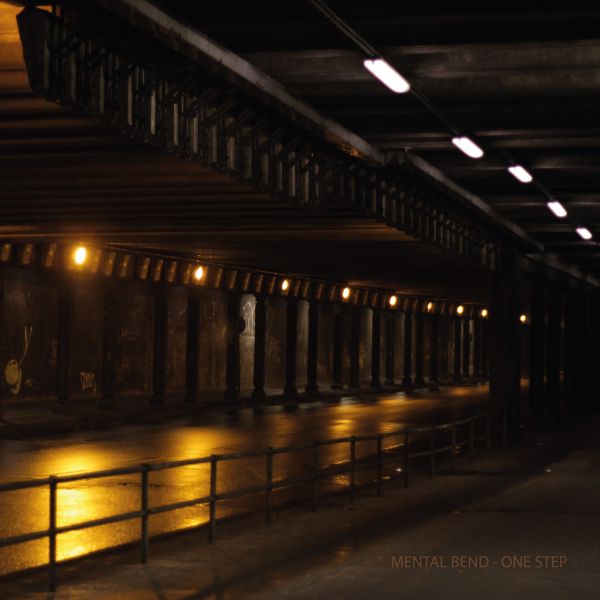 The night is what makes a big city come to life. Right after sundown, the hectic buzzing of downtown makes way for adventure playgrounds, bathed in neon light, revealing their countless chances and opportunities. It's when you'll find the subway spitting out it's purpose seeking passengers by the minute. A coming and going of restless people passing through. All it takes is a few hours, before the sunrise makes it all disappear. Mental Bend captures the magic of that very moment in their dreamy soundtracks. If you close your eyes, you can see blurry pictures passing in slow motion, accompanied by their atmospheric songs. Grainy black and white snapshots, fragments of memories lighting up somewhere in the farthest corner of the cortex. One Step is the Berlin-based indietronica duo's visually vivid debut album, released on Enfant Fenou. Mental Bend are all about letting go. Sissip (voc/synth/bass) and Hendrik Havekost (beats/production) know how to trust their instincts, crafting their hypnotic signature sound, somewhere in between electronica, ambient and dream pop. Before founding the band in 2013, the two were already shaping their skills in all kinds of different formations and styles of music. As soon as they got together, they had a viral mini hit with their song Take My Hand, praised on various tastemaker blogs and generating over 100.000 likes on Soundcloud in no time. The band's first long play record One Step is all about important experiences and decisions, small as well as big steps, all a part of making progress, which in the end can even be life changing. It was a step, that recently got Mental Bend their record deal on Mo's Ferry's sub label Enfant Fenou. In the New Release Information past year, Sissip and Havekost accepted the offer to play a small tour in Japan, even without having an album to share. And so it was on the other side of the world, that the Berlin Duo ran into a second Berlin Duo. Of all things in the hustle of the world's most populous metropolis Tokyo, they met their current label colleagues Dapayk & Padberg, alias Eva Padberg and Mo's Ferry co-founder Niklas Worgt, who were immediately impacted by Mental Bend's individual sound. One Step is the result of this fateful encounter, and it's no coincidence that it revokes memories of the scores of modern movie classics like Sofia Coppola's Lost In Translation or Jim Jarmusch's Only Lovers Left Alive. Inspired by artists like Portishead, Tricky, Massive Attack, Radiohead and The XX, Mental Bend invent their very own soundscapes. Spheric loops, trippy downtempo beats and indulging chords make for massive walls of sound, interweaved by fragile and melancholic vocals from another world. Sometimes creepy and dark, sometimes ethereal and surreal. It all results into an almost impossible to grasp mix of organic and electronic elements, mirrored by the band's name, Mental Bend aren't shy of making sudden turns in their tracks, bending their ideas into unpredictable creative sculptures and walk on unexpected paths, always challenging their listeners to really listen. When composing, I try to blend out my consciousness and only think in pictures and emotions, says Hendrik Havekost about his producing. The density combined with the diversity of Mental Bend's music, is a result of two minds working together, always leaving space for the audience to paint their own picture. One Step, is their creation of a world of sound for the imaginary citizens of Metropolis. A sound matured and perfected on two tours through Germany, as well as at shows at the Berlin Berghain-Kantine, the C/O Pop Festival and the renowned Jetztmusik Festival in Mannheim. My move to Berlin definitely had an imprinting effect on my lyrics., Sissip explains. You are permanently surrounded by the most contrary influences and a massive variety of choices. Just like Hendrik, my writing works on a very subconscious level and I get my inspiration from emotions and the music itself. The lyrics mostly end up being very metaphorical. They are based on the processing of my emotions and experiences. The influence on One Step doesn't stop in Berlin and Tokyo. The foundation is actually laid in New York City, where the Duo wrote the title track in 2015. That was a very inspirational experience., Sissip continues. After arriving, we explored New York on foot for the whole day, following the pulse of the city and sucking everything in. We spent the next few days in the studio, depriving ourselves from sleep and preserving our impressions in that one song. This special atmosphere also comes up in the other tracks, like the restless Walking, the claustrophobic Invisible, the hypnotic love song Madly In Love or the contemplative pop song Counting Stars. That song is about finding your place in this huge and confusing world we live in., Sissip adds. Sometimes you feel like an alien and wish for a place you can call home. I believe that we create such a place for ourselves with the music we make, providing us with a safe haven, and hopefully a place, our listeners can retreat to as well.


Tracks:
A1 Madly In Love A2 Counting Stars A3 Fast Forward Day A4 Stay A5 One Step B1 Machines B2 Invisible B3 Lost B4 Walking