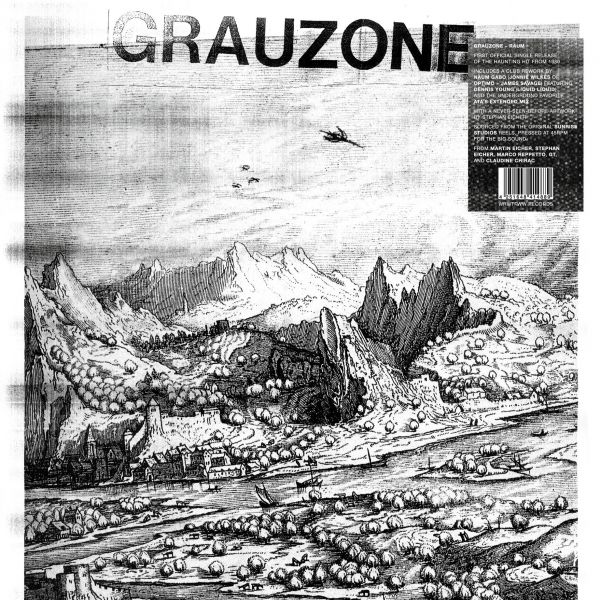 WRWTFWW Records is beyond thrilled to announce the first ever vinyl maxi-single release for Raum, Grauzones best-kept secret and underground mega-gem from 1980. The four-track affair includes the full title track sourced from the original reels, as well as a club-ready rework by Naum Gabo (Jonnie Wilkes of Optimo and James Savage) with help from Dennis Young of Liquid Liquid, and an extended edit by legendary Frankfurt DJ Ata (Robert-Johnson club, Playhouse/Klang/Ongaku labels). The 12 inch vinyl is cut at 45rpm and comes with a never-seen cover art by band member Stephan Eicher and a handmade Xerox hype sticker.

Initally released almost 40 years ago on the beloved compilation Swiss Wave - The Album (Off Course Records) alongside the bands massive hit Eisbär, Raum is the biggest Grauzone track people have yet to discover. An über-infectious New York style bassline played by Christian GT Trüssel and frantic drumming by Marco Repettos blend with Martin Eichers hauntingly hopeless lyrics and Claudine Chiracs saxophone escapades to personify post-punk heaven and all its wonderful anomalies. Its disco with an edge, pop filled with fear, its The Cure infused with proto-techno and Swiss art chic. Or maybe, its simply one hell of a song that will make you dance and shout. Its good!

Further on the a-side, Naum Gabos rework takes Grauzone to modern dance floors with a thumping track and bounce-inducing groove on which Liquid Liquids very own Dennis Young adds magic in the form of marimba, Roto Toms, and EBowed guitar. The energy is electric, the sound is huge, a club banger with extra heart, ready for sound systems of all kinds.

The b-side features Ata Macias fabled extended version of Raum (first released in 2010 via Live at Robert Johnson) that Stephan Eicher described as the perfect Grauzone edit (and it is!), plus a straight to the point radio edit of Naum Gabos rework.

This release follows WRWTFWWs reissue of Grauzones Eisbär maxi single as part of the 40 years anniversary of the band. There is much more comingstay tuned!